Intrepid Travel was offering 25% off all of their tours as part of a Black Friday sale in November, so I decided to book the 9-day Colonial Colombia tour on a whim. Colombia has been on my destination wish list for a few years and I finally took the plunge based on the fact that winters in Seattle area dreary, flying time is relatively short and the country is fairly inexpensive to visit. 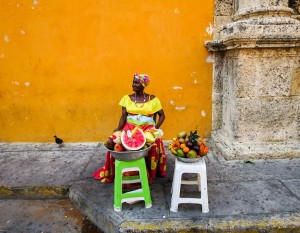 Once I announced that I was going to Colombia, many of my friends and family were concerned for my safety. I heard statements such as: “don’t get kidnapped by drug lords” and “why on earth would you want to go there?” The U.S. State Department travel page warns of dangers ranging from kidnapping to terrorist attacks. As you’ll see in my post below, those fears are completely unfounded and I felt safer in Colombia than in many large cities within the U.S. I’m sure there are cases of theft and more serious crime on occasion but that can happen to anyone, any place in the world. It’s important to take the standard safety precautions you would anywhere else in the world. I wouldn’t walk down a dark alley in downtown Seattle at 1 am and I’m not going to do it in Bogotá either.

The start of the trip
I flew from Seattle to Atlanta and then Atlanta to Bogotá on Delta, which was around 9 hours of flying of time. The plane from Seattle to Atlanta was larger than the plane on the Atlanta to Bogotá route which surprised me a bit. The flight was mostly uneventful, until we started to land. The pilot announced that the landing was going to be very turbulent and looking out the window I could see why. We were going to land in a thunderstorm. My heart started pounding out of my chest. My palms started to sweat. I reminded myself that we only had 10 more minutes and then we’d be on the ground. I shut my window and tried to ignore the thunderstorm outside but I could still see the flashes of lightning through other people’s windows.

Thankfully, the landing wasn’t bumpy at all. Thank you Delta pilots for navigating the plane around the storm.

My trip takes a turn for the worse
I landed in Bogotá at 10:45 pm and planned on grabbing my luggage and making my way to the Aloft Bogota airport shuttle. I waited 25 minutes for the luggage to appear on the conveyor belt and expected my bag would be one of the first to appear since it was tagged Sky Priority. Several Sky Priority bags go by and there’s no sign of my luggage. Regular bags start coming out and still no sign. With every minute, I get a sinking feeling that my bag didn’t make it onto the plane and my suspicions were confirmed when the luggage belt turned off.

I walked up to the Delta rep and explained that I was leaving Bogata the next morning for Cartagena. “No problem! Just go to the Copa Airlines counter in Cartagena and they’ll help you out,” he tells me. Why the hell would a random airline help me with my Delta luggage issue? At this point, it was 11:45 and I was tired and felt gross and all I wanted to do was check into my hotel. I was flustered by the baggage delay and couldn’t find the hotel shuttle so I decided to hop in a cab.

I was frustrated that my luggage didn’t arrive and I couldn’t find the Aloft shuttle so I hopped into a random cab, which turned out to be an unauthorized cab. We agreed on a price of $14,000 Colombian Pesos, which is approximately $7 USD. I figured that’s not a bad price for a 5-minute drive so I proceeded. When I got to the hotel, the price suddenly changed to $40,000 Colombian Pesos, or $20. I argued but the cab driver insisted he told me $40k instead of $14k. He wouldn’t unlock the doors until I paid him so I reluctantly gave him my money (no tip of course!).

I arrived at Aloft and checked in around midnight. I kept counting down the minutes until I could go to sleep. I asked the front desk clerk for if they had a toothbrush and toothpaste available since I packed my toiletry kit in my checked luggage (dumb mistake #2). They had a kit available at the low price of $10 USD. Fine, I’ll pay it. At this point, I’m desperate to brush my teeth. I finally get to my hotel room and get some sleep.

The flight to Cartagena was an hour and a half and I managed to sleep for most of it. I grabbed a taxi at the airport and paid around $10 USD to arrive at my hotel, Villa Colonial. The front desk staff didn’t speak very much English and I don’t speak very much Spanish but we were able to get by with the help of my Lonely Planet phrasebook.

As much as I wanted to get out of the hotel and explore Cartagena, I wanted to track down my luggage first. It was Friday and I knew that we would be leaving Cartagena early Sunday morning. I tried calling Delta’s customer service line but soon discovered that my cell phone could receive international calls but couldn’t dial internationally. I then downloaded the Google Voice app, which is a miracle on its own considering the Internet connection at the hotel was slow and flaky. Once I had the app, I called Delta customer service.

The first customer service rep that I talked to informed me that the ground crew in Bogotá should’ve opened a file number so that my bag could be routed to Cartagena after arriving in Bogotá. She basically told me “good luck and I hope you get your bag.” I realized she wasn’t interested in helping me out so I called back, talked to another person and got disconnected. I repeated this two more times until I finally found the most helpful customer service person in the entire world. She not only told me that a file number should’ve been created by the ground crew, she actually opened up one for me. She took down the address of my hotel and gave me an online tracking number. I was finally feeling hopefully that I may see my bag again.

Now that I finally had my baggage tracking number, I decided to go shopping for some new clothes. I wore winter running tights, a scarf and a thick long-sleeve shirt on the plane. It was 45 degrees when I left Seattle and it was 90 degrees when I arrived in Cartagena. Thankfully, I purchased travel insurance knew that I could spend up to $300 on clothing and toiletries. Changing out of my stinky clothes was the best feeling in the world.

I met my Intrepid group for the first time. There were 12 people on the first part of the Colombia tour and 6 of them were departing and 6 of us were joining the 9-day Colonial Colombia portion. Besides myself, there were 3 American girls, a girl from the Netherlands, two girls from Canada, an older woman from Canada, a couple from the UK, a guy from Belgium and a guy from Switzerland, in addition to our Colombia tour leader. We went to dinner at a cute Colombia restaurant in the Old Quarter and then headed back to our hotel.

The next morning, I was woken at 7 am by a guy speaking very fast Spanish. The good news? It was a call from Delta’s Bogota office informing me that my bag had arrived Friday evening and was being sent on the next Avianca flight into Cartagena. The bad news? Avianca wasn’t going to deliver the bag to my hotel since it wasn’t their fault in the first place. I was frustrated but I knew I needed to get my luggage on Saturday so I decided to head to the airport. When I arrived, I realized the guys in the Avianca office didn’t speak very good English and due to my bad Spanish, they couldn’t understand that I arrived on a Delta flight and was trying to pick up my bag. Thankfully, a manager in the back office heard our conversation and stepped forward to help.

I received some bad news: The flight carrying my bag was delayed by 3 hours. 3 whole hours! It’s not like the Cartagena airport is very large. It took me 15 minutes to browse the snack shop menus and walk through the three shops. There was no wi-fi so I entertained myself by eavesdropping on other people’s conversations, which is a little challenging when you can’t understand what they’re saying. After 3 ½ hours of sitting at the airport, my bag finally arrived. I hugged it and headed back to my hotel, determined to make the most of my remaining time in Cartagena.

Check back soon for the full story of my Colonial Colombia trip.